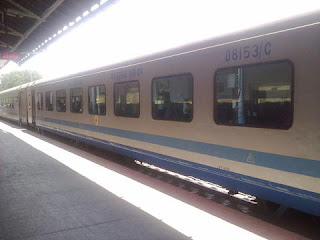 The Base Fare for Rajdhani, Duronto and Shatabdi class of trains will be on flexi fare system. Under the new ‘flexi fare system’, usually which is followed by airlines, the base fare of tickets will increase with the rising demand. The new fare structure will, however, not be applicable to 1 AC and executive class coaches.
While the first 10% of the seats will be sold at the normal fare, the base fare will increase by 10% with every 10% of berths sold. Once half the tickets are sold, the rest will be sold at 1.5 times higher base fares for 2S, sleeper and 2AC coaches, and 1.4 times higher for 3AC coaches.