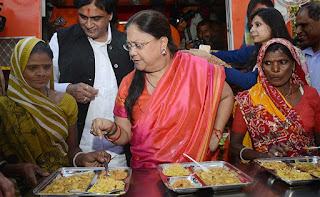 Rajasthan government has launched a subsidised meal scheme ‘Annapurna Rasoi’.  As per the scheme, the poor and the needy will get breakfast for Rs 5 and lunch or dinner for Rs 8. The scheme will be in 12 cities initially and introduced across the state later. Initially, the scheme has been launched in Jaipur, Jodhpur, Kota, Ajmer, Bikaner, Udaipur, Bharatpur, Baran, Banswara, Dungarpur, Pratapgarh and Jhalawar.
So, let’s discuss some questions related to this post:
Q1. Which state has launched a subsidised meal scheme ‘Annapurna Rasoi’?
Answer: Rajasthan