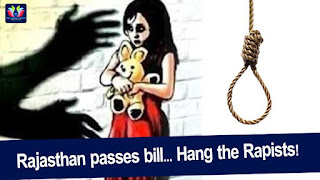 Rajasthan assembly has passed an amendment bill awarding death penalty for convicts involved in the rape of girls below 12 years of age. State Home Minister Gulab Chand Kataria introduced ‘The Criminal Laws (Rajasthan Amendment) Bill, 2018’ in the assembly, which was passed in the House by a voice vote following a debate.
The new amendment added sections 376-AA and 376-DD to the Indian Penal Code, 1860. The amendment says that a person who is convicted of raping/gang-raping a girl up to twelve years of age will be given a death sentence or rigorous imprisonment, which shall not be less than fourteen years and 20 years, respectively.
Static/Current Takeaways Important for Exams-
Source- The Times of India