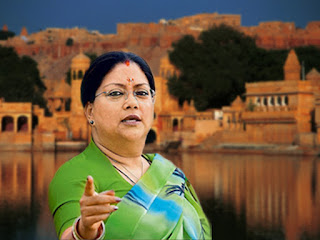 Rajasthan’s Chief Minister Vasundhara Raje laid the foundation of 14 projects worth Rs 2,229 Crore and said the city of Jaipur will be a ‘wonder city’ in next two years. The projects have been undertaken to make the capital a ‘wonder city’, Raje said while laying the foundation at Birla Auditorium.
The projects include converting Amanishah Nala into its original form of Dravyawati river. The task is being undertaken by Jaipur Development Authority, Tata Projects Limited and Shanghai Urban construction group with an estimated cost of Rs 1,676 crore. The project aims to make the 47-km long water body pollution free and beautiful in the next two years. Plantation of 16,000 saplings in 65,000 sq meters will also be a part of the beautification of the river.