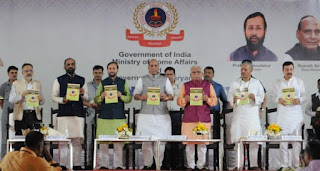 The Union Home Minister Rajnath Singh launched the Student Police Cadet (SPC) programme for nationwide implementation at a ceremony in Gurugram, Haryana. According to Home Minister, SPC would lead to a silent revolution over the years by focusing on character building by imparting moral values to budding minds.

Earlier the Home Minister launched the theme song and training manual of SPC prepared by the Bureau of Police Research and Development (BPR&D).