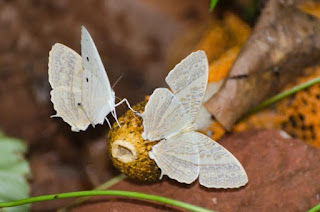 The butterfly was found by a group of green enthusiasts including N. Chandramohan Reddy, an Indian Forest Service officer, while they were exploring the thick forest of the Eastern Ghats of the region. The Marbled Map is a species of nymphalid butterfly found in parts of Asia.This species is pale green with faint vertical lines and rounded wings.

So let’s do:
1. Name the butterfly species, which has sighted in the Eastern Ghats?