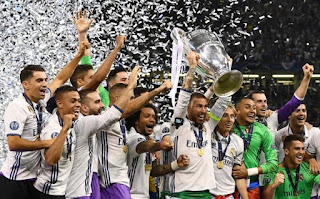 Never in the history of the UEFA Champions League had a team won the title in consecutive seasons. That is until now — Real Madrid has done it. The Merengues throttled Juventus, 4-1, Champions League final, 361 days after they prevailed over Atletico Madrid on penalties in Europe’s ultimate match. Now, they stand alone as the only team in the history of the competition to win back-to-back titles.

Unsurprisingly, it was Cristiano Ronaldo who found himself at the centre of attention in both wins. A year ago, he buried the winning penalty kick to set off the wild celebrations. This time around, he scored a brace to lead Real Madrid to not just their second straight Champions League title, but their third in four seasons.