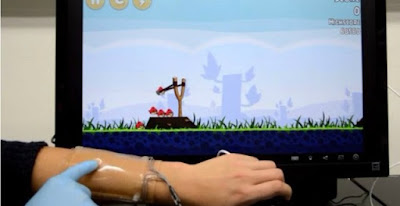 Researchers from Seoul National University in South Korea have developed a wearable touch screen panel that is highly stretchable and can be used to write words and play electronic games. The thin flexible ionic touchpad is highly transparent and it can be placed on one’s arm to play video games and draw.
The touchpad is made of hydrogel, a network of hydrophilic polymers that are soft and very stretchable, unlike the hard materials such as carbon nanotubes and metal nanowires earlier explored for the stretchy touchpads. Moreover, the touchpad was still able to operate when it was stretched to more than 1,000% of its normal area.

So let’s do:
1. Researchers from __________ in South Korea have developed a wearable touch screen panel