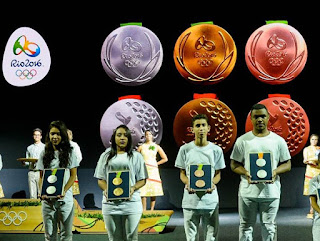 Rio de Janeiro’s governor declared a state of financial emergency and requested federal funds to help fulfill obligations for public services during the Olympics that start Aug. 5. Rio is expecting about 500,000 foreign visitors during the Olympics, which has coincided with Brazil’s worst recession since the 1930s.

The budget deficit expected in the state of Rio is over 19 billion reais ($5.56 billion) because the spending that was decided before the prices of the oil lowered, outran the revenue that is collapsing during the recession of Brazil. Fitch Ratings downgraded Rio’s debt rating to ‘B-’ from ‘B+’. It says that the state was suffering a ‘fast-deteriorating liquidity’ position. Michel Temer, Interim President has promised significant financial help. Other things in the city that are severely affected are hospitals and police stations.

So let’s do:
1. ______ de Janeiro’s governor declared a state of financial emergency.