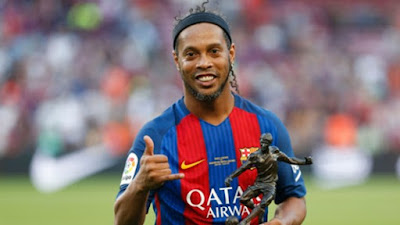 Brazilian World Cup winner Ronaldinho has formally confirmed his retirement from football, more than two years since his last appearance as a professional, reports in Brazil. The 37-year-old former Paris Saint-Germain and Barcelona star, a key member of the Brazil side which won the World Cup in 2002, last played in 2015 during a brief stint with Fluminense.
Ronaldinho’s career began with Gremio in Porto Alegre, his hometown, before he emerged as a star with French giants PSG. He then spent five years with Barcelona between 2003 and 2008, helping the Catalans win the Champions League in 2006, after being awarded the Ballon D’Or in 2005.