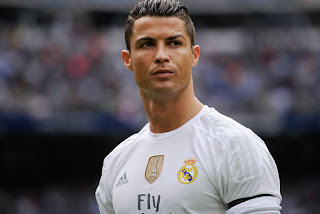 Real Madrid and Portugal superstar Cristiano Ronaldo has won the UEFA Best Player in Europe award for the second time. Ronaldo, 31, claimed the prize ahead of his club team-mate Gareth Bale and Atletico Madrid star Antoine Griezmann. The forward, who first won the award in 2014, scored the winning spot-kick as Madrid beat Atletico in the Champions League final on penalties in May.

Cristiano Ronaldo is a Portuguese professional footballer who plays for Spanish club Real Madrid and the Portugal natio’snal team. He is a forward and serves as captain for Portugal. In 2008, he won his first Ballon d’Or and FIFA World Player of the Year awards. He then won the FIFA Ballon d’Or in 2013 and 2014. In 2015, Ronaldo scored his 500th senior career goal for club and country.

So let’s do:
1. Name the footballer, who has won the UEFA Best Player in Europe award for the second time?