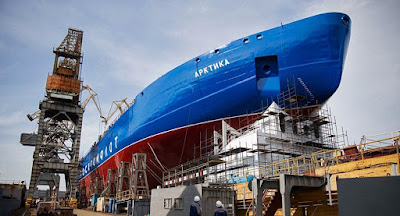 Russia’s new Project 22220 nuclear-powered icebreaker dubbed Arktika was launched from the Baltic Shipyard in Russia’s second largest city of St. Petersburg. Built at the Baltic Shipyard, which belongs to Russia’s United Shipbuilding Corporation, project 22220 is the world’s largest and most powerful vessel of its kind.
The Project 22220 vessel is 189.5 yards long and 37.1 yards wide. The ship displaces 33,540 metric tons. Fitted with two specifically designed RITM-200 nuclear power reactors. It has dual-draft design which makes it possible to use it in Arctic waters and in estuaries of polar rivers. It can break through 13 feet (3 metres) thick ice. The vessel is 173.3 meters long and 34 meters wide. It has displacement capacity of 33540 metric tons.
So let’s do:
1. Name the country, which was launched most powerful nuclear icebreaker Arktika?