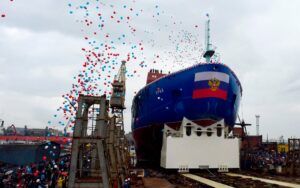 Russia launched a nuclear-powered icebreaker, part of an ambitious programme to renew and expand its fleet of the vessels in order to improve its ability to tap the Arctic’s commercial potential. The ship, dubbed the Ural and which was floated out from a dockyard in St Petersburg, is one of a trio that when completed will be the largest and most powerful icebreakers in the world.

The Ural is due to be handed over to Russia’s state-owned nuclear energy corporation Rosatom in 2022 after the two other icebreakers in the same series, Arktika (Arctic) and Sibir (Siberia), enter service.

Important Takeaways for SBI PO/Clerk Mains-
1. Vladimir Putin is President of Russia.
2. Moscow is the capital city of Russia.
3. The Russian ruble is the currency Russia.
4. Dmitry Medvedev is PM of Russia.