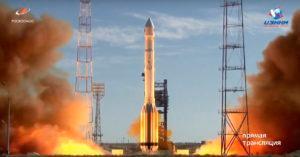 Russia launched a space telescope from the cosmodrome in Baikonur, Kazakhstan. It was a joint project with Germany. The Russian space agency, showed a Proton-M rocket carrying the Spektr-RG taking off from the launch pad.

The Spektr-RG, is a space observatory intended to replace the Spektr-R, known as the “Russian Hubble”, Spektr-R was launched in 2011 to observe black holes, neutron stars and magnetic fields. Its successor will take up similar duties.