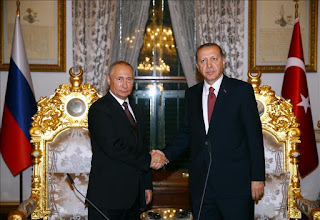 The Russian and Turkish leaders have agreed to intensify military and intelligence contacts after a meeting in Istanbul, Turkey. After his meeting with Turkish President Recep Tayyip Erdogan, Russian President Vladimir Putin said, they have agreed on the need for aid to get to the northern Syrian city of Aleppo.
The two countries have also signed a deal to construct two pipelines to send Russian gas under the Black Sea to Turkey. Ties were strained after Turkish forces downed a Russian war plane in November 2015. Speaking at a joint news conference with Mr Putin, Mr Erdogan said he was confident that the normalisation of relations would take place rapidly.
So let’s discuss some questions related to this post:
Q1. Who is the President of Turkey?
Q2. What is the currency of Russia?
Source- The Hindu