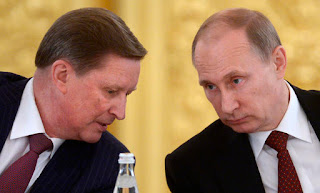 Russian President Vladimir Putin has unexpectedly dismissed his close ally and powerful Chief of Staff Sergei Ivanov, in the highest level change inside the Kremlin in several years.
Ivanov, who served with Putin in the Soviet-era KGB spy agency, was replaced by his deputy Anton Vaino. Vaino, a 44-year old ex-diplomat, has served as his deputy since 2012. He is the grandson of a Soviet-era Communist Party boss of the Baltic republic of Estonia. According to Kremlin, Putin had decreed to relieve Ivanov of his duties and handed him a job as a special representative for conservation, environmental and transportation issues.