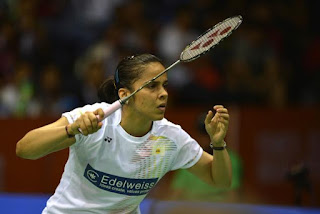 Indian ace badminton player, Saina Nehwal received a huge boost ahead of the Rio Olympics as she clinched her second Australian Open title after defeating China’s Sun Yu in a thrilling three-game final of the Super Series badminton tournament.

The 26-year-old from Hyderabad eked out a 11-21 21-14 21-19 over the World No. 12 Sun in a fighting summit clash that lasted an hour and 11 minutes. London Olympics bronze medallist, Saina, who had beaten two world champions — Thailand’s Ratchanok Intanon (2013) and China’s Yihan Wang (2011) in the quarterfinals and semifinals — thus clinched her maiden title of the season and pocketed a cheque of USD 56,250.

So let’s do:
1. Name the badminton player, Who has won the Australian Open title?