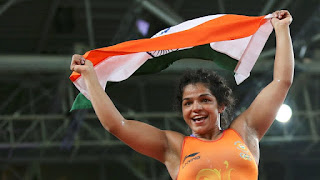 Rio Olympics bronze medalist Sakshi Malik has been appointed as Wrestling Director at Maharshi Dayanand University in Rohtak. Haryana Sports and Youth Affairs Minister Anil Vij, said that she will be given Rs 21 lakh out of his discretionary fund and a plot measuring 500 square yards.
Sakshi Malik is an Indian freestyle wrestler. At the 2016 Summer Olympics, she won the bronze medal in the 58 kg category, becoming the first Indian female wrestler to win a medal at the Olympics and the fourth female Olympic medalist from the country. She is a part of the JSW Sports Excellence Program, along with fellow female wresters Vinesh Phogat, Babita Kumari and Geeta Phogat.

So let’s do:
1. Name the Wrestling, who has appointed as Wrestling Director of Rohtak University?