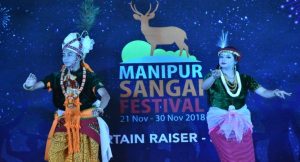 Every year the State of Manipur celebrates the “Manipur Sangai Festival” from 21st to 30th November. The ‘Festival’ is named after the State animal, Sangai, the brow-antlered deer found only in Manipur. It started in the year 2010 and has grown over the years into a big platform for Manipur to showcase its rich tradition and culture to the world.

The festival is organized by the State Tourism Department and biggest festival held annually to promote tourism. The formal inaugural function of the festival was held at Hapta Kangjeibung at Imphal. During the festival, cultural programmes, traditional games, folk dance and classical music will be performed by different communities of the State as well as from other States.