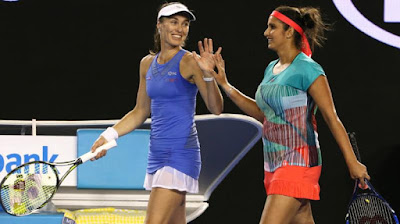 Sania will now play with world number 21 Barbora Strycova from the Czech Republic while Martina has teamed up with CocoVandeweghe of the United States of America. great began their partnership last year in March with a bang, winning three titles on the trot — at Indian Wells, Miami and Charleston. Sania became world number one in partnership with Martina when they won the Charleston event. Sania also enjoyed her first ever women’s doubles Grand Slam title by winning the Wimbledon in the company of Martina.

So let’s do:
1. Name the tennis pair, which has decided to end their astonishing partnership?