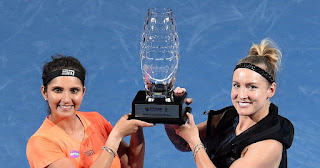 Indian tennis ace Sania Mirza picked up her first title of the season, combining with American Bethanie Mattek-Sands to lift the Brisbane International women’s doubles title. The top-seeded Indo-American duo triumphed 6-2 6-3 against the second-seeded Russian team of Ekaterina Makarova and Elena Vesnina in the final.
The trophy, however, ended Sania’s 91-week reign as the world No.1 doubles player in the WTA rankings. That position was taken over by her partner Bethanie.