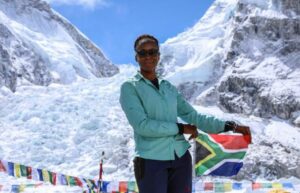 South African Saray Khumalo has reached the highest point on the planet becoming the first black African woman to scale Mount Everest. This was her fourth attempt at climbing Mount Everest. In a previous attempt in May 2017, Khumalo had to be rescued from Mount Everest by helicopter.