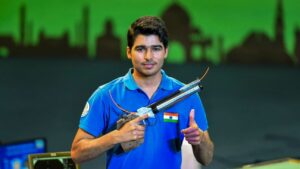 Chaudhury has already secured a berth for the Tokyo Olympics. This is India’s second Gold in the championship.