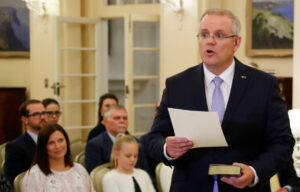 Scott Morrison has been sworn in as Australia’s Prime Minister, 11 days after retaining the position in the country’s general election. Along with Deputy Prime Minister Michael McCormack, Morrison was sworn in by Queen Elizabeth’s official representative in Australia, Governor-General Sir Peter Cosgrove, in the capital, Canberra.