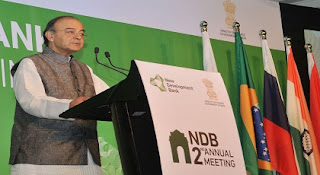 A new financial order built by the emerging BRICS economies of Brazil, Russia, India, China and South Africa. New Delhi is playing host to Second Annual Meeting of the New Development Bank (NDB) also known colloquially as BRICS bank. This is the first time the meet is happening in India. MOUs were signed between NDB and European Investment Bank (EIB), European Bank for Reconstruction and Development (EBRD), Asian Infrastructure Investment Bank (AIIB), Eurasian Development Bank (EDB) and International Investment Bank (IIB).
India has sought USD 2 billion loans for various projects from the NDB. India has also signed a 350 million dollar loan agreement with NDB for financing Development and Upgradation of Major District Roads in Madhya Pradesh. This is the First Loan Agreement for NDB assisted project in India. In the event, Finance Minister Arun Jaitley stated that India has successfully implemented a number of reforms and Indian economy is expected to grow at 7.2 percent in 2017 and at the rate of 7.7 percent in 2018.
Takeaways from above News-
If you have any other takeaways, do share with us in the comment section
Source- The Indian Express