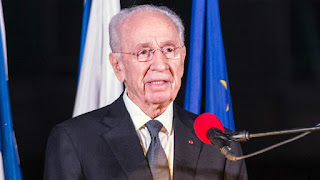 The former Israel’s defining political figures and a Nobel peace prize laureate, Shimon Peres has died at the age of 93.

He had served twice as a prime minister and once as a president. He held several diplomatic and military positions during and directly after Israel’s War of Independence.

So let’s discuss some questions related to this post:
1. Shimon Peres, former Israeli president won the Nobel prize for which field?
Source – The Hindu