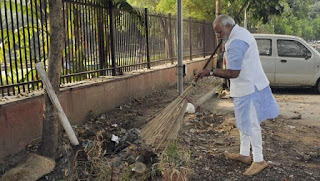 Sikkim has been adjudged the cleanest state while Jharkhand comes last in the list of 26 states. Gujarat is ranked 14th in the survey conducted by National Sample Survey Office (NSSO). The results of survey carried out last year by National Sample Survey Office (NSSO) was released by Union Rural Development Minister Narendra Singh Tomar in New Delhi.
Apart from Sikkim, the states in the top ten cleanest list are Kerala, Mizoram, Himachal Pradesh, Nagaland, Haryana, Punjab, Uttarakhand, Manipur and Meghalaya.
So let’s discuss some questions related to this post:
1. Expand the term NSSO?
2. Name the state, which has been adjudged the cleanest state in the country, according to NSSO?
3. Who is the Union Rural Development Minister?