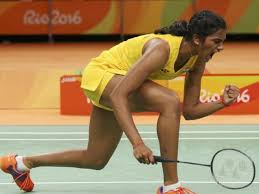 Olympic silver medalist P.V. Sindhu clinched her maiden Super Series Premier title after edging out Sun Yu of China in the finals of the USD 700,000 China Open badminton tournament in Fuzhou, China.
Sindhu, who became the toast of the country after becoming the first Indian women to win a silver at Rio Games, continued her rampaging run as she lifted the prestigious title after beating Sun 21-11 17-21 21-11 in the summit clash that lasted an hour and nine minutes.
Source- The Hindu
×