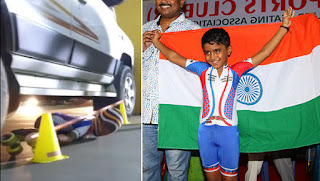 A six-year-old boy from Karnataka set the world record for covering longest distance by limbo-skating under cars. Om Swaroop Gowda clinched the Guinness World records title after a successful attempt to travel a staggering 65.283 metre distance while holding his body just above ground and maintaining a splits position throughout.
Om managed to clear 36 cars during the incredible challenge at Orion Mall in Bangalore. Official Guinness World Records adjudicator Rishi Nath attended the event to ensure that all the rules for were followed correctly. To set this record, the gap between the parked vehicles can be no more than 20 cm and the gap underneath each car can be no more than 35 cm. Previously, the farthest distance limbo skating under cars was 48.21 metres and was achieved by Shreeya Rakesh Deshpande of India at at MIDC, Kolhapur in 2012.

So let’s do:
1. Name the boy, who has set the Guinness world record for covering longest distance by limbo-skating under cars?