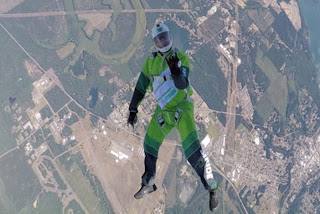 Skydiver Luke Aikins, became the first to jump from a height of 25,000 feet without a parachute, landing in a net in southern California. He has completed the jump in Simi Valley, west of Los Angeles. He had made his first tandem jump when he was 12.

the 42-year-old daredevil leaped 25,000 feet to Earth setting the world record for the highest jump. To accomplish this feat, Aikins had to direct his body in free fall using only the air currents around him to land safely on the high-tech 10,000-square-foot net (about a third the size of a football field) laid out to catch him.

So let’s do:
1. Name the Skydiver, who has Sets Record For Highest Jump Without Parachute?