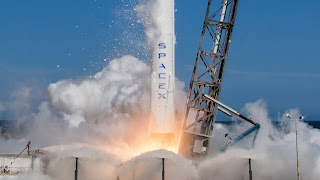 The National Aeronautics and Space Administration (NASA) has ordered a second mission from SpaceX (Space Exploration Technologies Corporation) to take astronauts to the International Space Station (ISS). The Hawthorne space company received its first order from NASA in November. Both SpaceX and Boeing Co. now each have two orders from the space agency to ferry as many as four crew members and about 220 pounds of cargo at a time to the space station.
SpaceX’s Crew Dragon spacecraft will launch on one of the firm’s Falcon 9 rockets from Launch Pad 39A at Kennedy Space Center in Florida. SpaceX has said its first manned test flight to the space station will be in 2017. Space Exploration Technologies Corporation, better known as SpaceX, is an American aerospace manufacturer and space transport services company headquartered in Hawthorne, California, United States.

So let’s do:
1. Name the space agency, who has ordered  a second mission from SpaceX to take astronauts to the ISS?