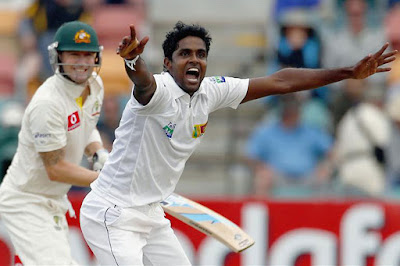 International Cricket Council (ICC) has suspended Sri Lanka’s fast bowler Shaminda Eranga from bowling. He was suspended after an assessment of his bowling action. The assessment revealed that all deliveries exceeded the 15 degrees level of tolerance permitted under the regulations.
Shaminda Eranga, who has played 41 times for Sri Lanka across all three formats, was reported after the second Test against England at Chester-le-Street. In accordance with Article 6.1 of the regulations, Eranga’s international suspension will also be recognised and enforced by all National Cricket Federations for domestic cricket events played in their own jurisdiction. But he can play domestic cricket in Sri Lanka, with the consent of the country’s cricket board.

So let’s do:
1. Name the Sri Lanka’s fast bowler, who was suspended after an assessment of his bowling action?