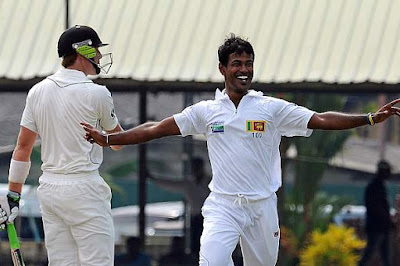 Sri Lanka seamer Nuwan Kulasekara has announced his retirement from Tests to focus on limited-overs cricket. The right-arm pacer has represented Sri Lanka in 21 Test matches and picked up 48 wickets since making his debut in April 2005.

Kulasekara made an instant impression in his first ODI, against England at Dambulla. He started his career as a softball enthusiast before he shifted his focus to cricket, joining Nugegoda Cricket Club and then Galle Cricket Club. He also won the best bowler award in the 2002-03 domestic competition. A maiden test fifty against England at Lord’s in 2006 showed his natural batting abilities in the lower order. But his bowling during the same tour lacked penetration and he dropped out of the squad for eight months.

So let’s do:
1. Name the cricketer, who has announced his retirement from Tests ?