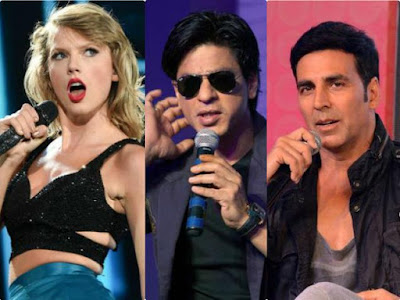 Bollywood stars Shahrukh Khan and Akshay Kumar were the only Indian celebrities to make way for the Forbes list of world’s highest-paid celebrity, With annual earnings of 33 Million dollars, Fan’s star Shahrukh Khan successfully bagged the 86th position on the list. On the other hand, Akshay Kumar was placed on 94th position with making about 31.5 million dollars in a year.
Musician Taylor Swift with $170 million in her earning bag seized the top spot on the list. Band One Direction took the No. 2 spot, with earnings of $110 million, followed by author James Patterson at 3rd position with $95 million. Football star Cristiano Ronaldo sparked in the Forbes list after claiming Euro cup title for Portugal under his captainship and got 5th rank in the list with earnings of 88 Million dollars.

So let’s do:
1. Name the Bollywood stars, which have secured position in world’s highest paid celebrity list released by Forbes?