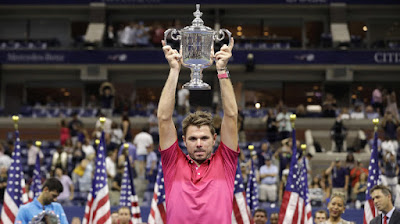 Stan Wawrinka defeated world number one Novak Djokovic to claim a third Grand Slam title at the US Open tennis tournament. Wawrinka secured a 6-7 (1/7), 6-4, 7-5, 6-3 victory over Serbia’s Djokovic.
Stanislas “Stan” Wawrinka is a Swiss professional tennis player. The 31-year-old Wawrinka is the oldest U.S. Open men’s champion since Ken Rosewall was 35 in 1970.  He has reached three Grand Slam singles finals in his career, winning all three: the 2014 Australian Open, the 2015 French Open and the 2016 US Open.
So let’s discuss some questions related to this post:
1. Name the Swiss professional tennis player, who has won the Grand Slam title at the US Open tennis tournament?