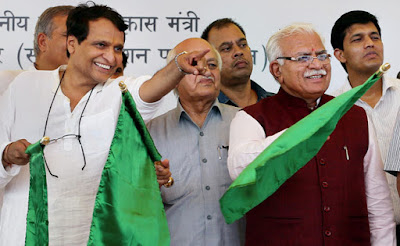 Railway Minister Suresh Prabhu has flagged off a maiden train on 81-km railway line between Sonipat and Jind and stressed on the need to create infrastructure to promote growth and to meet future challenges.
The train between Sonipat and Jind will also connect several hinterland villages and urban clusters with 13 railway stations, of which 10 will be new railway stations. The MoU was signed recently between them for constitution of a joint venture entity for development of rail infrastructure in the state, which Prabhu said was going to be the first such state to have this kind of partnership.

So let’s do:
1. Name the new train service which has been flagged off by Union Railway Minister between Sonepat-Jind?