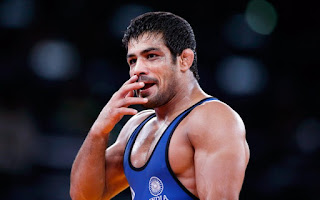 Sushil Kumar was wanted by all the teams ahead of the new season of Pro Wrestling League (PWL) and the bidding war created history in New Delhi. Sold to Delhi Sultans for a whopping amount of Rs 55 lakh, Sushil is now the most expensive player in the history of the tournament.
PWL 3 is slated to begin from January 9, 2018 and the auction in underway as teams fight to pick the best players and set up a strong team. Sakshi Malik, India’s 2016 Olympic bronze medalist, was bought by the Mumbai Maharathi side for Rs.39 lakh. World Championship gold medalist Helen Maroulis was bought for Rs.44 lakh by Haryana Hammers.