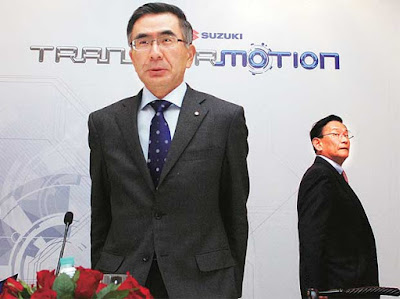 Suzuki Motor Corp has appointed Toshihiro Suzuki, son of Chairman Osamu Suzuki, as its next chief executive effective the same day, as the Japanese automaker attempts to recover from a vehicle testing scandal.

Toshihiro Suzuki, 57, assumes his role after his father, long-serving chairman Osamu, last month said he would step down as CEO to take responsibility for the firm’s use of incorrect testing methods to calculate vehicle mileage. Osamu, 86, will remain chairman. Having led the company since 1978, the patriarch will extend his run as one of the longest-serving global auto executives, raising questions about how much longer he can run the company. Analysts said that while succession had been a long time coming, having father and son in the top two positions means Osamu would reign as he has for nearly 40 years.

So let’s do:
1. Name the person, who has appointed as CEO Suzuki Motor?