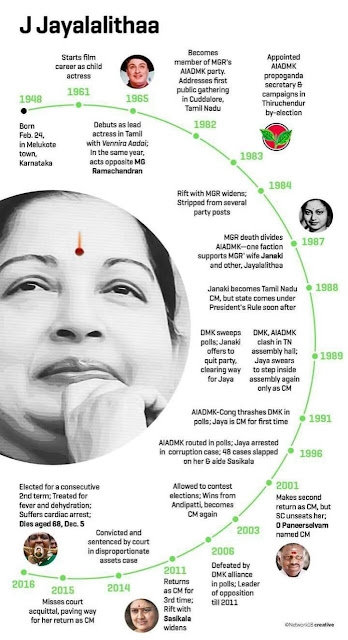 Tamil Nadu Chief Minister Jayalalithaa Jayaraman  passed away at a Chennai hospital last night (05th December 2016), the 68-year old AIADMK supremo breathed her last at 11:30 PM at the Apollo Hospital. She had suffered a massive cardiac arrest. Jayalalithaa was admitted to the hospital on September 22, 2016 following complaints of fever and dehydration, but she never fully recovered. Jayalalithaa’s body was taken to her Poes Garden residence before being taken to Rajaji Hall, where people can pay their last respects to the departed soul.
Tamil Nadu government has announced a seven-day State Mourning from 06th December 2016. During the period, the national flag on all government buildings will be flown at half-mast. No official entertainment will also be held during this period, The government has also declared a three-day holiday for all educational institutions in the state. The neighbouring union territory of Puducherry has also announced a holiday for all government offices and educational institutions as a mark of respect to Jayalalithaa.
Source- The Indian Express
×