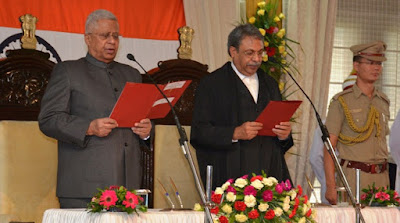 Roy was administered the oath of office by Chief Justice of Gauhati High Court, Justice Ajit Singh in a brief but impressive function at Darbar Hall of Raj Bhavan, Itanagar. He is the 18th Governor to be sworn in as Governor of this Himalayan State. Among others, Chief Minister Kalikho Pul and his Cabinet colleagues including Deputy Chief Ministers Kameng Dolo and Chowna Mein, Speaker Wangki Lowang, former Chief Minister Gegong Apang, Chief Secretary Shakuntala D Gamlin and DGP S Nithianandam attended the function.

So let’s do:
1. Name the person, who was sworn in as the acting Governor of Arunachal Pradesh?