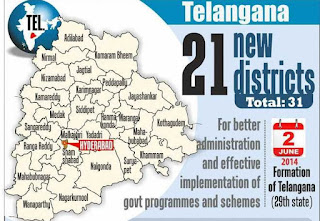 Nearly two-and-half years after it came into existence as India’s 29th state, Telangana’s map was redrawn on 11 October 2016 with the creation of 21 new districts, With these, the total number of districts of the youngest state of India went up to 31.
So let’s discuss some questions related to this post:
Q1. Who is the Chief minister of Telangana?
Q2. Name the state which has redrawn its map by creating 21 new districts, recently?