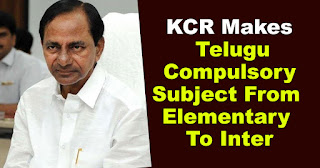 Telugu would be implemented as a compulsory subject from first standard to Intermediate, including in the CBSE and ICSE schools, from the next academic year in Telangana.
Deputy Chief Minister K. Srihari, who also holds Education portfolio, reviewed the steps to be taken before the commencement of the 2018-19 academic year in tune with the decision already taken by Chief Minister K. Chandrasekhar Rao.