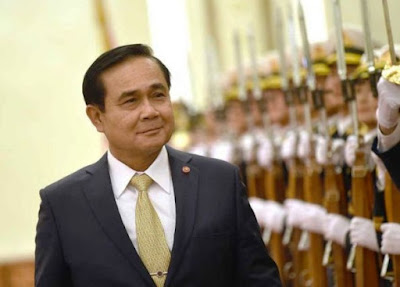 Prime Minister of Thailand, Prayuth Chan-ocha, arrived in New Delhi for a three-day visit aimed at reviewing bilateral relations. Prayuth is visiting the country on an invitation of Prime Minister Narendra Modi. He is accompanied by his deputy, five senior ministers and a 46 -member business delegation.

Prayuth will hold bilateral talks with Modi and then proceed for delegation-level talks. It is Prayuth’s first visit to India. Former Thai PM Yingluck Shinawatra had visited India in January 2012, when she was invited as chief guest for India’s Republic Day celebrations. Boosting maritime ties and enhancing cooperation on combating militancy will be high on the agenda. Discussions on education, science and technology and people-to-people contacts are also expected to take place between the two countries.

So let’s do:
1. Expand the term FICCI and CII?
2._______ PM Chan-ocha arrives in Delhi on a three-day visit to boost ties between both the nations.