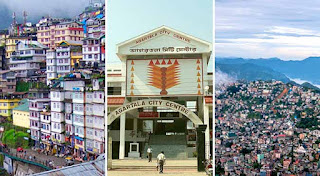 Aizawl, Gangtok and Agartala, the capital cities of the three Northeastern states of Mizoram, Sikkim and Tripura have found their place among the 10 cleanest cities of the country in a survey conducted by New Delhi-based research and advocacy organization, Centre for Science and Environment (CSE).


Also, the study revealed that the top three cleanest cities of the country as per the CSE survey are Alappuzha in Kerela, Panaji in Goa and Mysuru in Karnataka. These cities which have a “municipal waste management systems that actually work” is followed by Bobbili in Andhra Pradesh in the fourth place. Mizoram’s capital Aizawl was placed in the fifth rank and was followed by Pune,
So let’s do:
1. Name the Indian North Eastern cities, which have have found their place among the 10 cleanest cities of the country in a survey?