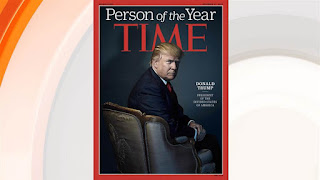 The TIME magazine has named US President-elect Donald Trump as Person of the Year 2016 and called him the President of the ‘Divided States of America’. The magazine cited his role for the stunning victory in the US Presidential election.
Trump had won the presidential elections, despite losing the popular vote by a record 26 lakh votes. Donald John Trump is an American businessman, politician, and the President-elect of the United States. He is scheduled to take office on January 20, 2017.

So, let’s discuss some questions related to this post:
Q1. Who is the TIME magazine person of the year 2016 award?
Ans1. Donald John Trumph
Source-The Hindu