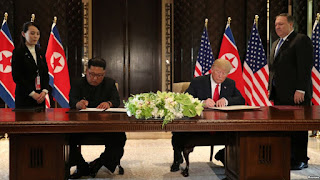 The United States has decided to provide security guarantees to North Korea, in exchange of Pyongyang’s firm and unwavering commitment to complete denuclearisation of the Korean Peninsula.
This is according to the joint document which was signed by US President Donald Trump and North Korean leader Kim Jong Un following their historic maiden talks at Singapore’s Sentosa island. Both nations commit to establishing new relations in accordance with the desire of the people of the two countries for peace and prosperity.
Static/Current Takeaways Important for SBI PO/Clerk Exam 2018-
Source- The Times Now