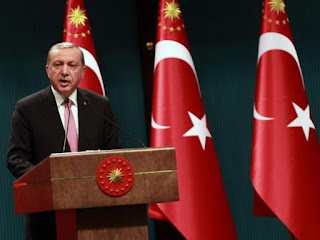 Recep Tayyip Erdogan, Turkey’s President has declared a three-month state of emergency following a botched coup attempt, asserting he would rid the military of the “virus” of subversion and give the government sweeping powers to expand a crackdown that has already included mass arrests and closure of hundreds of schools.
The decision was made following a meeting with cabinet ministers and top security advisers in Ankara. A coup was attempted by a faction within the Turkish Armed Forces against the incumbent Justice and Development Party in Turkey, which ultimately failed. The faction organized the coup under a council calling itself the Peace at Home Council. The Coup led to several consequences at domestic level like death of more than 300 people and injury to more than 1000, damage to the Turkish Parliament and the Presidential Palace, mass arrests, suspension or teachers and government employees and many more.

So let’s do:
1. Name the country, Which has declared a three-month state of emergency following a botched coup attempt?