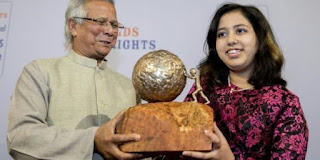 Kehkashan Basu a 16-year-old Indian girl based in the UAE has won this year’s International Children’s Peace Prize for her fight for climate justice combating environmental degradation.
She was presented the award by Nobel peace laureate Muhammad Yunus at The Hague. At the age of 12, Kehkashan founded her organisation Green Hope, which now has operations in over 10 countries.