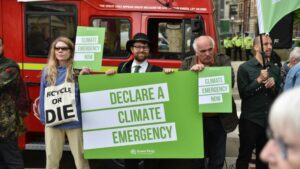 The UK parliament became the first national legislative body in the world to declare a climate change emergency. The motion was approved without a vote and registers the views of the House of Commons without compelling the government to act on any particular policy proposal.

It also calls for the government to work towards carbon neutrality before 2050 and for ministers to draft proposals within the next 6 months to restore the country’s environment and create a “zero waste economy.”