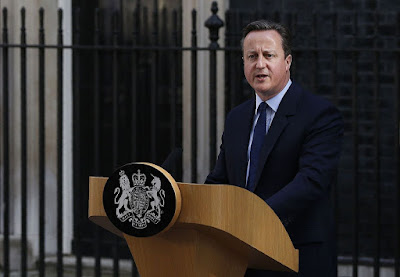 The Prime Minister of United Kingdom (UK) David Cameron announced his resignation hours after the Brexit vote that favoured leaving the European Union (EU). During the campaign, Cameron-led Conserve Party advocated for remaining with the EU.
In the referendum that was held on 23 June 2016, 51.89 % of the voters preferred to leave the EU. Among the 46.5 million people who registered to vote, only 48.11 percent voted to remain in the grouping. However, the result must still be approved by the UK Parliament to become effective. Cameron will step down in October 2016 at the Conservative Party Conference to make way for a new Prime Minister to guide the UK in the new direction for the country.

This British politician was first elected to the Parliament of the United Kingdom in 2001. At present, he represents the Oxfordshire constituency of Witney. Following the election of a hung parliament in the 2010 general election, he became Prime Minister as the leader of a coalition between the Conservatives and Liberal Democrats.

So let’s do:
1. Name the Prime Minister, who has announced his resignation after the Brexit vote?